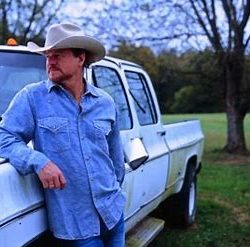 After graduating from high-school at the age of eighteen, Paul Overstreet moved from the bayous of Mississippi to the music capitol of the world, Nashville, Tennessee. Not owning a suitcase, he brought with him a laundry basket of Levis and football jerseys, ten original songs and a guitar. He packed them in a ’68 Ford Fairlane with lots of dreams of how great it was all going to be when he finally got to the “Big City”.

It was a long, hard road, but the dream of writing songs and making records was so big that the toughest roads weren’t going to stop him. After sleeping in his car and eating potato salad sandwiches for a while, he got a job at a water heater factory. The future was not looking too bright, but somehow the dream stayed alive. Looking back now on the earlier years, Overstreet says, “It’s amazing to realize that the reality is greater than the dreams that started the whole adventure.” Overstreet believes that it was his talent and vision, given to him by God, that enabled him to reach his goals as a songwriter, artist, and producer.

As a songwriter, Overstreet has written and co-written 27 top ten songs, his first being George Jones’, Same Ole Me. Numerous other artists have recorded his songs including Randy Travis, singing On the Other Hand, Diggin Up Bones and Forever and Ever, Amen. Tanya Tucker topped the charts with One Love at a Time and My Arms Stay Open All Night and then teamed up with Paul Davis and Overstreet with the hit,” I Won’t Take Less Than Your Love”. The late Keith Whitley, and after him, Alison Kraus, recorded “When You Say Nothing at All”, The Judds sang “Love Can Build A Bridge” and Kenny Chesney belted out She Thinks My Tractor’s Sexy, and the song that really put Blake Shelton on the map, “Some Beach”. Other hits have been recorded by Kenny Chesney, Blake Shelton, Brad Paisley, Carrie Underwood, as well as Glen Campbell, Pam Tillis, Mel Tillis, Travis Tritt, The Forester Sisters, Marie Osmond, Michael Martin Murphey, and countless others. When You Say Nothing at All was released in the major motion picture, Notting Hill, starring Julia Roberts and Hugh Grant. It has also been released on the movie soundtrack, sung by the UK artist, Ronan Keating.

As an artist, Overstreet has written and recorded many songs himself. You Can’t Stop Love was the debut single for the trio S.K.O. (Schuyler, Knobloch and Overstreet) on M.T.M. Records and enjoyed a place at the top of the charts. That album produced two other top ten hits as well. Overstreet’s first solo project began when RCA released Sowin’ Love. The five singles released from this album were all top ten hits, including the title cut, Sowin’ Love, Paul’s “signature” song All The Fun, and his first number one, Seein’ My Father in Me. The second album, Heroes, included the hits “#1 Daddy’s Come Around”, “If I Could Bottle This Up”, Heroes and Billy Can’t Read, which became the theme song for the CMA/CMT Project Literacy. The next album Love is Strong, gave Paul his first #1 song on Christian radio with the title cut and gave him another chart topper with There But For The Grace of God Go I.

Not only have Paul’s songs been recorded by other artists, but they have earned him numerous awards. Overstreet, along with other co-writers, has earned two Grammy Awards, his first for Forever and Ever, Amen and the other for Love Can Build a Bridge. BMI honored Overstreet as Songwriter of the Year for five consecutive years from 1987-1991. This is a mark on the Music Row wall that has not been reached before or since. He also won CMA and ACM Song of the Year in 1987 and 1988. The Love Is Strong album earned Overstreet a Dove Award for Country Recorded Album of the Year in 1992. He also earned Dove Awards for Country Recorded Song of the Year in 1991 for Seein My Father in Me and There But For the Grace of God Go I in 1994. Overstreet has been awarded the TNN Viewer’s Choice Award for Christian Country Artist and received the Christian Country Music Association Award for Mainstream Artist-of the Year as well.

In 2003, Paul was inducted into the Nashville Songwriters Hall of Fame. In 2011, less than a week after Elvis Presley joined the dozen artists honored with markers on the Mississippi Country Music Trail, Vancleave’s Paul Overstreet became Jackson County’s first marker recipient.

The trail markers, researched and placed by the Mississippi Development Authority, were first unveiled in 2010 and have honored such musical pioneers as Conway Twitty, Faith Hill, Jimmie Rodgers and Marty Stuart

One of the most rewarding of Overstreet’s many ventures is his involvement with his good friend, Franklin Graham and the Billy Graham Evangelistic Association. Overstreet has also had the distinct honor of traveling to areas such as Nicaragua and Honduras with Samaritan’s Purse, a relief organization committed to meeting the spiritual and physical needs of people in crisis situations.