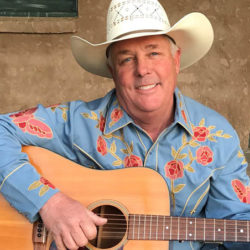 Art Green is a native of Santa Barbara County. Inspired by his late uncle, Weldon Hobbs, Art began playing guitar at family gatherings at the age of eleven. Art and his brother, Marv formed their band “The Green Brothers” and for the next thirteen years played as professional musicians at weddings, honky tonks, county fairs and rodeos. In 1992, the Green Brothers band won the True Value/GMC Country Showdown for the Northwest. They went on to Branson, Missouri for the national finals and placed in the top five in the competition. Art has had success as a solo musician as well, winning Male Vocalist of the Year in 2002 for the North American Country Music Association International. And his solo CD, “Ride for the Brand” was named Album of the Year in 2001 by the California Country Music Association. Today, Art still picks up his guitar and sings for family and friends, and is currently finishing several new, original songs. But his priority and real true love is managing the cattle operation at the Alisal Ranch.