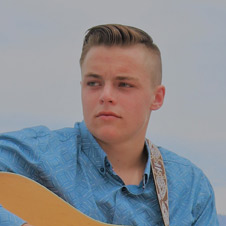 Carson Wallace is a singer-songwriter from Springville, California (in the foothills of the Sierra Nevada Mountains). He recently turned 16 years old and is a junior at Porterville High School. Carson began singing and performing at four years old. He was inspired to be a performer and songwriter by his uncles, Art and Marv Green; who have taught him a lot about writing songs and telling a story through music. He plays songs from many different genres, but most of his original music is can be classified as a combination of Country, Christian, and Southern Rock. Carson recently won the Central Valley 106.7 KJUG Country Showdown Competition and moved on to Salem, Oregon where he placed second in the Western Regional Competition. He has played at a wide variety of events including family gatherings, restaurants, rodeos, county fairs, the Buck Owen’s Crystal Palace and has opened for the James Barker Band and the band King Callaway. Carson plans to attend college in Tennessee or somewhere nearby in the Midwest and major in Music Business. He then wants to pursue a career in the music industry either as a singer-songwriter or as a producer, manager, or other music related occupation. Other than singing and writing songs, Carson enjoys raising and showing beef cattle, hunting big game, and playing water polo.